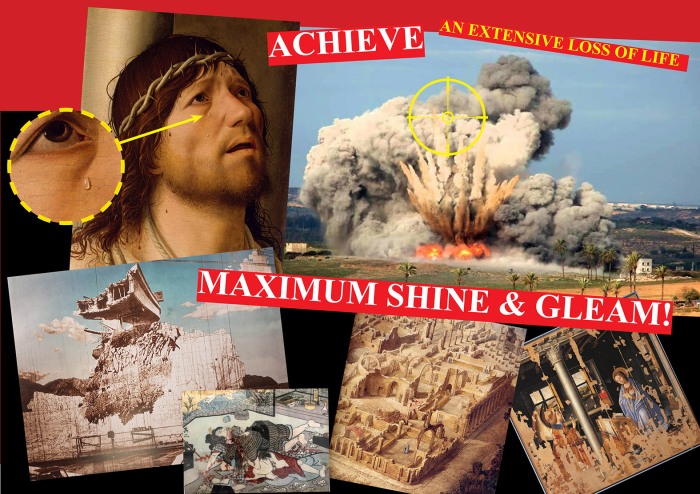 A hecatomb was a great public sacrifice in ancient Rome and Greece. Usually the massacre of 100 oxen driven to the temple steps and drowned in their own blood. ¬ Nabucco and Ketamine both began with the sacrifice of Melbourne. The purpose was to achieve a surface with the maximum shine and gleam that could mirror the new ontological principle of a New Melbourne: construction sites. A holy city by any other name.
There is no intellectual game here. Im not interested in densities, or in the peculiarities of planning, the incongruities in law, or a critique of economics despite what has now become fashionable: politics without politics. I have no interest in trying to construct ideological paradigms that mean the erasure of architecture itself, but I am almost certain I do not elaborate the profession. I will not become its president.
My politics are very clear: I do not imagine that cannibals accept democracy when choosing a meal.

Michael Spooner is a Melbourne based designer, writer, curator and teacher within the discipline of  architecture. He holds a Bachelor of Architecture (1st hons) and PhD (by project) from […]
ABOUT

46 Little Latrobe Street: the office of Edmond and Corrigan

A Clinic for the Exhausted