This project began primarily concerned with two things: preservation and progress. However, it became increasingly evident that whilst my interest lies between these two conditions, it is focussed on the point at which both conditions can simultaneously exist and seeks the potential in this.

Harold Bloom in his book ‘Hamlet: Poem Unlimited’ writes about Shakespeare’s own environmental experiences at the time of writing Hamlet as having given rise to the character of the same name.

John Hejduk speculates, as an extension of this thinking, that one of those experiences was witnessing the Globe Theatre deconstructed, transported across the River Thames and reconstructed as an exact copy. He goes further to surmise that it was this action in particular, where the playwright was able to witness the architectural artifice deconstructed and reconstructed, that enabled him to conceive of Hamlet the dramatic construct who constantly deconstructs and reconstructs himself, the play in which he exists and also the world outside of the play. Further, not only does he interrogate his own ‘globe’ (his head), but also ‘The Globe’ as theatre and the ‘Globe’ as the world beyond the confines of the play.

Out of architecture is born a self-perpetuating crisis; a character anxious to preserve himself, whilst just as anxious to move forward with decisive action. But of what value is Hamlet to either the Archive or the School? My speculation is that through a series of curated operations, the same productive crisis can be embedded into the architectural systems of an institution, provoking regular doses of critical introspection.

The site, suitably, forms part of a larger discursive conversation within the university, but also remains as an artefact of the city. At the urban scale the site is a remnant of a series of manoeuvres dating back to 1883 during the realignment of St Kilda Road and the reconstruction to Prince’s Bridge, reaffirming the prized Swanston axis. Following ARM’s anti-monument proposal, and NH’s subsequent master plan, Godsell’s design hub was forced to defer to the axis, leaving a courtyard ravine between itself and the archive. ARM then broke that rule, conceptually capping the axis.

Picking up on this schism and the dichotomous relationship between the Design Hub and the Design Archives adjacent, my first manoeuver seeks to push together the place of learning, discovery and progress and the place of collection, curation and preservation.

Forced into tension via an operation which slices the original school building and pulls it across the site, the design archives, as well as the courtyard artefact are encased and claimed overtly by the school, entombed as objects for the archive in and of themselves. 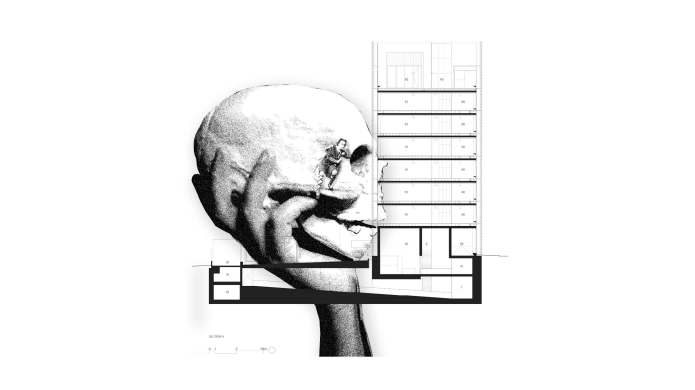 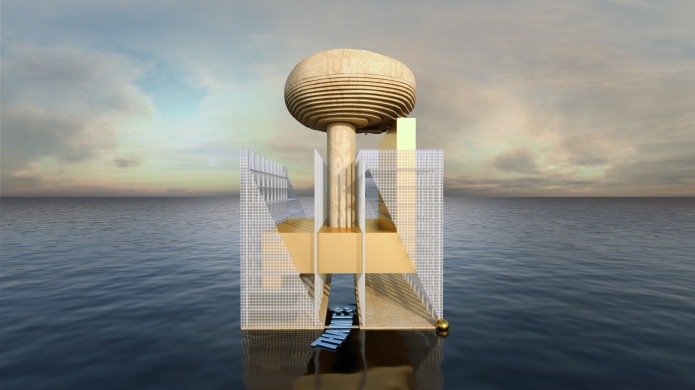 This operation also seeks to re-enact the transport of the Globe Theatre, reframing the courtyard, or the space between the buildings as the apparently transfigurative waters of the River Thames. However, where the Globe theatre is completely rebuilt, this project only seeks to rebuild itself in part, suspending itself over the waters only half transferred, forcing a constant negotiation or ‘crossing’ between the river and its two banking via an archive bridge. 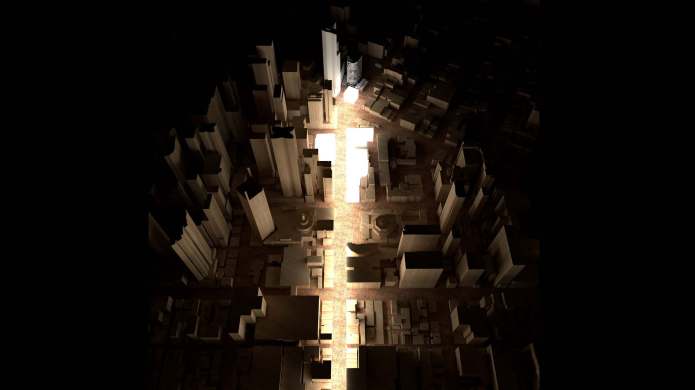 At a smaller scale, the site forms part of conversation that plays out down the RMIT portion of Swanston St that protests the architectural opinions of an institution. Extending on that conversation, my proposition questions whether this discursive conversation can be continued within the new singular entity that straddles the axis.

Suspended over the river, the architectural construct, like Hamlet, can be actively introspective. 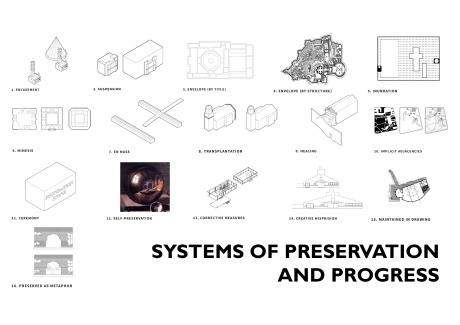 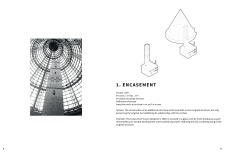 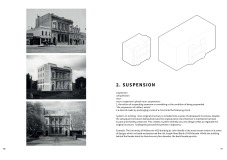 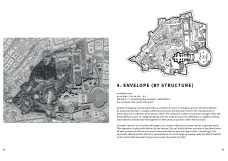 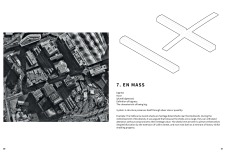 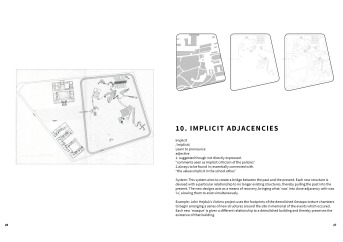 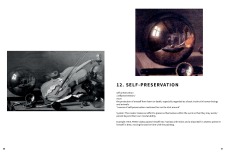 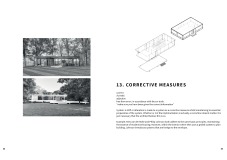 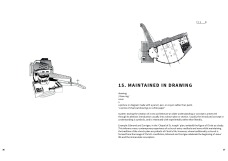 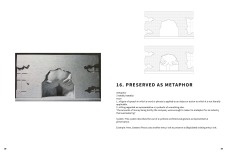 Pulling into adjacency a collection of histories which range from existing conditions to the nebulous aspirations of an architect, a condition is procured which holds not only these specific histories against each other but all that they bring with them. 16 ‘systems of preservation and progress’ (outlined in the the project footnotes above)  form the architectural methods by which this condition may be procured. 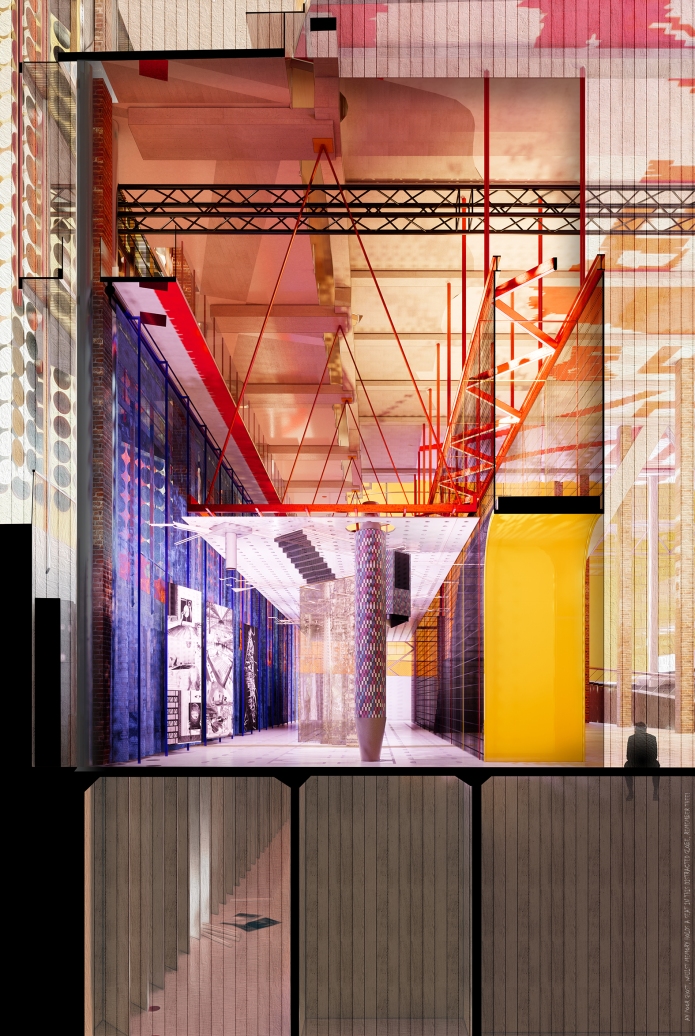 This can be seen in the space where the Design Hub’s foyer once existed. As per Sean’s aspirations, the height and length of Michelangelo’s Laurentian Library are more correctly reinstated as the new ceiling datum for an exhibition space. On exhibition is the foyer of Building 8. Called into being as a floor plan made of ceiling lights, it is suspended against the ceiling plan of the Laurentian Library inlaid into the floor of the new gallery space. Their adjacency begins to be resolved through the actual tectonic realisation of the elements represented in the plan. Not only relevant as the prior foyer of the architecture school, this apparition of Building 8 also recalls the proclamation of the basement wall, scrawled on a tram by Corrigan, recited by Godsell… “Mother Knows”. 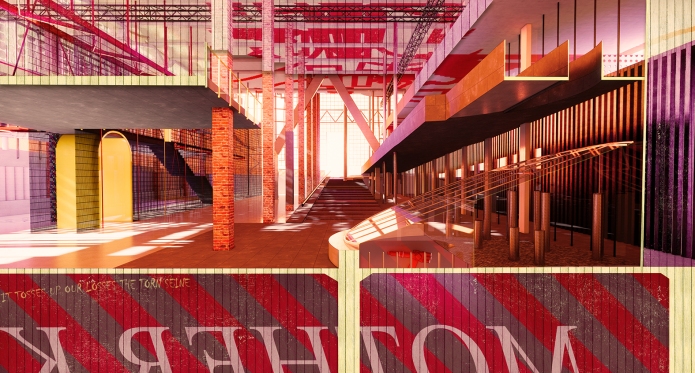 The design hub stair which stretches from the foyer level to the level 1 basement in one long line remains, despite the rest of the building being shifted across.

Becoming a primary point of entry off street level, the stairs stretched proportions are held in space and exposed not only to those traversing the stairs but also those next to it. Nothing remains but the floor and the web forge, making the experience of entry entirely the consequence of one of the building’s definitive materials. 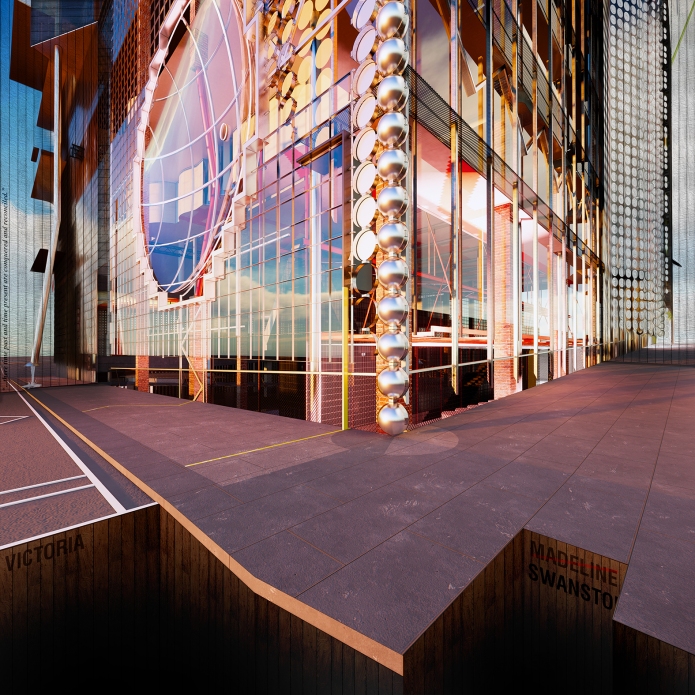 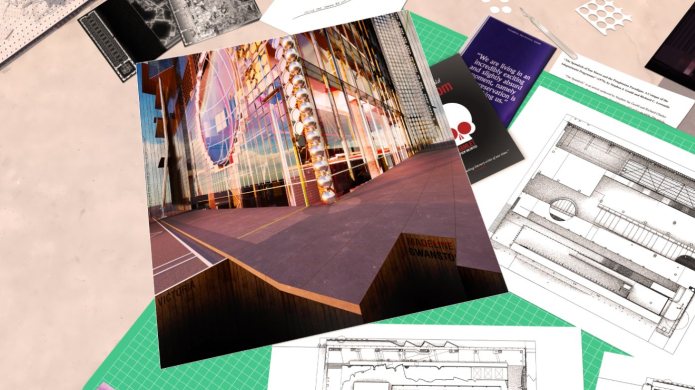 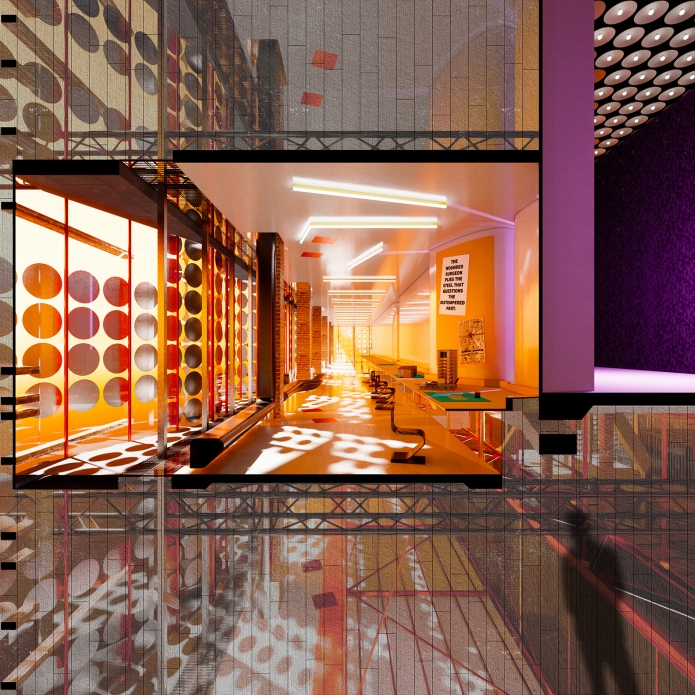 The halved courtyard steps – realign the Victoria St entry with the axis, creating a procession down to the monument missing its heads. A sectional relationship between the two memorials on the site is exploited, exposing and condition which holds in adjacency well known representations of the future and the past of a school.

Against the red and black backdrop a robot dances on rails. 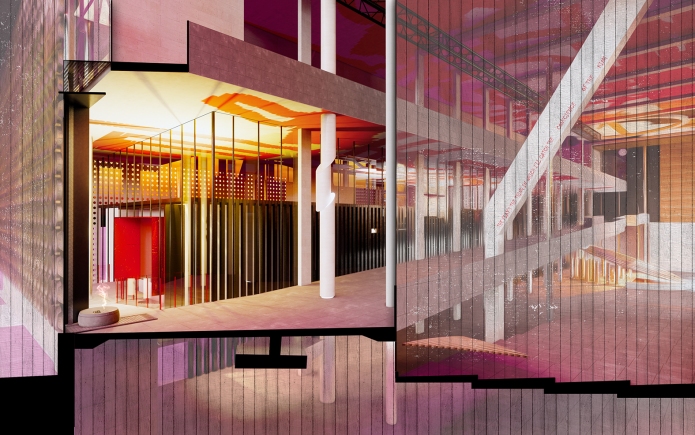 The soffit which bridges above is covered in blurry red lines which recall the construction patterns of Godsell’s original design, highlighting the unresolvable nature between the past and the present. It raises questions of what and why, which are only ever vaguely answered when the red blur seems to align for moments with the remnant of what Sean built.

The remainder of the existing design hub structure that didn’t move across the river is left teetering on a faulty point which seeks to resolve the entire building and from which the entire building is set out. In a lecture following the completion of the building, Godsell stated that in the initial concept, the discs were in fact conceived of as spheres. Taking Sean’s aspirations as a truer version of the thing, the set out point of the building is recovered as the truest version of itself and revolve to form a string of pearls, reflecting Swanston St back at itself.

Absorbing the city, the column grid of the building is realigned at 24.57 degrees to match the Hoddle grid. The misalignment of the columns is registered literally in a kind of scaring on the floor and ceiling of the new teaching spaces but primarily becomes evident in the new archive space placed at the centre of the building.

In Hamlet, the character Ophelia grows increasingly mad, acting quite literally as a measuring stick for the state of Denmark. Within the building, the central archive storage behaves in a similar way, with each shifted column enacting a type of wound on the outer skin. 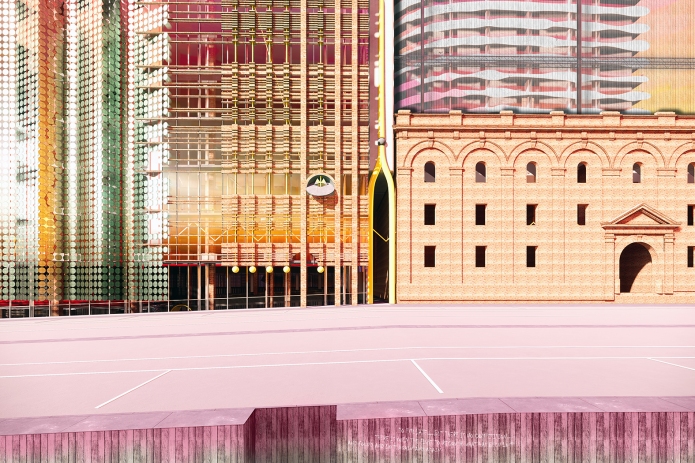 Along Swanston St, the façade is largely stripped of discs, and an attempt at restoration is made through the implementation of one large disc, a nod back to the sequence of bay windows growing their way along the city campus.

The other end of the façade makes a material change back to the CUB brick whilst attempting to maintain a sense of porosity. Here the historical material of the site can be seen not to align with the modern aspirations of a building skin, leaving a seemingly decayed façade…maybe another falling wall.

But why? Programmatically, the building tries to manifest the ‘radical school’ – hopefully becoming the system or provocation by which pedagogical evolution may occur. In a broader sense the project ultimately aspires to an elevated capacity of architecture to not only provoke but enable change. It attempts to address the ability for architecture to operate in an increasingly preserved environment, and explores operative methods by which that may occur.

It approaches to hear what T.S Eliot called ‘the loud lament of the disconsolate chimera’ where ‘time present and time past are perhaps present in time future.’

And that lament can be heard in the object that sits atop all else. Self-assured but ultimately knowing probably less than any other part of the project … it is by logical step a kind of answer; a type of telos or cap stone for the project or something which, in Blooms terms may be called Hamlet’s necessary annihilation. T.S. Eliot speaks to the same necessity in his poem Four Quartets when he describes an ascension ‘costing no less than everything’.

In my own terms it represents that next thing ex renovatio. It queries, in its abysmal depth what could be (perchance there should be a dream beyond what is) and what we now know. It understands that all this ‘stuff’, all of these operations are in hope of some ultimate emergence, albeit undefinable until somehow as apparition it rises.

It tries to answer every question with satisfactory precision but answers nothing quite well enough. It is an almost cloud, made almost solid, of almost stone.

It is perhaps Yorick’s skull, with his brain still encased.

And it is my exit to a world beyond the wall, through the quatrefoil and out the doors of the Laurentian Library, released by Michelangelo or Peter or Sean or Shakespeare. It is but a ball of questions and perhaps in THAT there is answer enough to keep on asking. 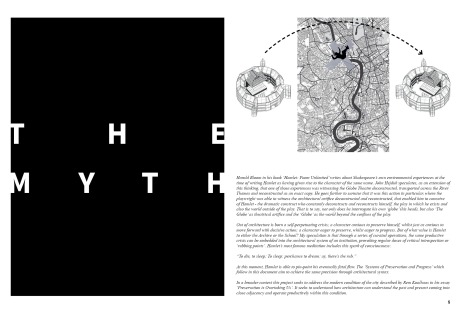 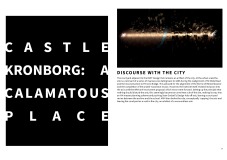 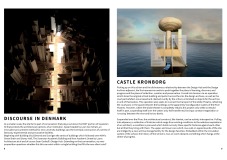 Michael Spooner is a Melbourne based designer, writer, curator and teacher within the discipline of  architecture. He holds a Bachelor of Architecture (1st hons) and PhD (by project) from […]
ABOUT

46 Little Latrobe Street: the office of Edmond and Corrigan

A Clinic for the Exhausted

A Portrait of Love

First published: Caliper 06, Love Edition, December 2019 Prologue My grandfather Claude was an astonishing influence on how I have viewed the world. He would attend at Christmas, crossing the […]
A Portrait of Love